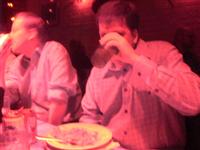 It was a cold and rainy night in Somerville, but inside the East Coast Grill it was hot as hell. Hell Night was underway. Eight of us were there to brave the heat of the most amazing hot cuisine in the world. Cuisine where dishes with habañeros are mild by comparison, and heat is expressed in Bombs. Cuisine where appetizers have names like “Weapons of Ass Destruction,” accompanied by drinks like The Cold Fusion Martini and The Hurler From Hell. And then there was the Pasta From Hell: the raison d’être and original dish of Hell Night, a dish so vilely full of peppers that it was reputed to cause uncontrollable vomiting, or worse, in those who were at the same table where it was consumed.

The eight of us—Charlie, Niall, Tennessee Lee, Greg, Bill, Julian, Andrew, and me—crowded around the bar, blue ribbon winning beverages in hand, waiting for our table. We compared preparatory strategies: several of us had premedicated with Pepcid, others grasped eagerly as rolls of Rolaids were passed. Around us there was an excited buzz. A server walked past in red hospital scrubs and a face mask. There was a stocky black man with an LCD belt buckle flashing the word “HOT” and a sweatshirt embroidered with red peppers.

We finally got a seat, in a room lit by dim red light bulbs, and ordered a round of appetizers. One Hurler, one martini, both five bombs; a plate of thermonuclear hot wings (six bombs, described on the menu as “Weapons of Ass Destruction”), a plate of Hell Fries, an order of littleneck clams with habañero peppers, four bombs apiece. And an order of Pasta From Hell, one of only two items on the menu with an eight bomb rating

Others around the table had been working on Tennessee Lee all week. “You have to order it, Lee. The honor of the State of Tennessee is at stake.” It was agreed that he would eat it and that we would all get a taste; Andrew refused Lee’s generous offer of a 60-40 split.

That settled, Lee shot the Hurler (a raw oyster floating in homemade pepper vodka) and blinked. “That’s pretty hot,” he said. I tasted the martini, and unbidden a description from the 2004 Hell Night floated through my mind: “Julian drank the martini and got very quiet for the rest of the night…” It was in fact the nastiest beverage I had ever drunk, far worse than the Hurler. I carefully replaced the martini on the table, ate a few littlenecks and some Hell Fries, and nibbled a jalapeno pickled with habañeros and Scotch Bonnets—probably the least hot food I ate all night.

Out of the corner of my eye, I noted Andrew returning the second hot wing he had taken uneaten to the common plate. A wing bone sat on his plate, and sweat was starting from his sideburns and under his eyes. He reached for the ketchup, poured about a cup of it on his plate, and started eating it with a spoon. I’m not normally a ketchup man, but I took the bottle and put a little on my plate as well. It was the only food on the table that had no hot peppers.

The LED belt buckle man, now identified as Doctor Pepper (backstory in an article in the Patriot Ledger)*, approached the table, waiver form in hand. Lee signed the waiver after much blustering from both sides, and the Pasta arrived. Lee took a big forkful, twirled it, and forked it into his mouth. Doctor Pepper said, “Oh, man! Ain’t seen nobody take a big first bite like that!” Lee took another bite. He said, “Where I come from…” and paused, then downed his water in a gulp. As Doctor Pepper cackled behind him, he gasped for breath and said “You know, I can see how people would vomit from this.”

The plate went around the table. Each of us took a piece of the pasta. I consumed a noodle about two inches long and started frantically eating ice. It was without a doubt the hottest food that had ever been in my mouth. I wasn’t brave enough to eat the sausage. For that matter, no one was. Shortly there was no pasta left on the plate, mostly due to Lee’s valiant efforts, but much of the sausage remained untouched.

Entrées arrived, to our collective relief. I passed a dish of cole slaw—with no peppers—over to Tennessee Lee. “You might want some of this,” I said. He took several forkfuls in gratitude. My Korean spicy noodles with shrimp and scallops (rating: 4 bombs) were a mild, refreshing, civilized delight to my brutalized palate. I can only imagine how Lee felt about his five-bomb skirt steak.

A feeling of dreamy satisfaction settled over me as the endorphins kicked in. By the end of the night, one thing was clear: Hell Night would always be a stag event for us because none of our wives or girlfriends would ever be so stupid as to bring this on themselves.

* Update 2022-06-16: That Patriot Ledger article goes to a dead link. There is a more recent interview with Doctor Pepper in the Boston Globe from 2017.