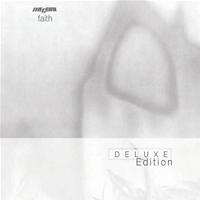 This weekend as I was driving around in the rain with Charlie, I was playing “The Drowning Man” from the Cure’s seminal 1981 release Faith on the car stereo. My friend asked, “Which band is this?” When I told him it was the Cure, he said, “Oh. There have been so many new bands coming out that sound like the Cure, I wasn’t sure whether it was one of them or the real thing.”

Which is to say, this new series of double-disc reissues of the Cure’s early albums, which started last fall with Three Imaginary Boys and continues tomorrow with Seventeen Seconds, Pornography, and Faith, could not come at a more auspicious time. Thanks to bands like Interpol and Bloc Party, which owe debts to Robert Smith’s moody musical style and eccentric vocals respectively, the time is ripe for a rediscovery of the Cure’s legacy. And this series of reissues is definitely the right way to do it.

The sound on this reissue is gorgeously clean. At this point in their history, the revolving Cure line-up was down to a core of three: Smith on vocals and lead, Simon Gallup on bass, and Laurence Tolhurst on drums, with keyboardist Matthieu Hartley abruptly leaving days before the recording session started. Slimmed down to the elemental basics, the band’s playing is honed tight, with Gallup’s big bass sound up front and Smith’s guitars washing over the mix. (For better or worse, this is also the release where, perhaps to fill in some of the gaps in the mix, Smith started reverbing the hell out of his vocals.)

And some of the songs on this disc are stone classics. The major lyrical inspirations for the songs are said to be the death of “several friends and relations” and the terminal illness of Tolhurst’s mother, and that combined with Smith’s meditations on faith and disbelief provide the thematic core for the album. There is a broad sonic range within the basic bleakness of the album: “Primary” and “Other Voices,” which both appear on the excellent Staring at the Sea compilation, are jittery, paranoid fun, as is “Doubt,” while “The Funeral Party,” “The Drowning Man,” and “Faith” are majestic, epic stretches of unremitting rainy darkness. This release is where the Cure found the heart of darkness that was only hinted in earlier songs. The band wouldn’t release another album that was so thoroughly and completely dark until Disintegration closed out their classic period at the end of the 1980s, but the darkness that flowered on Faith is what many still consider to be the Cure’s classic sound, and it would reappear lyrically or musically on almost every other Cure release.

The bonus material is excellent on this release, as with the others in the series. Rounding out Disc 1 is a 27-minute instrumental called “Carnage Visors,” a soundtrack to a 1981 tour film and previously available on the cassette version of Faith. Disc 2 consists of home demos and studio out-takes of the “Faith” material, three previously unreleased songs cut during the Faith sessions, and majestic live performances from the summer of 1981. Disc 2 closes with the Cure’s landmark 1981 single “Charlotte Sometimes,” previously available on the Staring at the Sea compilation, in which the dead ground covered by the Faith sessions yields a sinisterly beautiful flower, a perfect goth pop single.

On April 26, the Cure release expanded editions of Seventeen Seconds, Faith and Pornography. To hear some of the tracks from all three releases, check out The Cure Sampler Listening Party.

If you are going to buy more than one Cure CD and would like to save money, go to the Rhino website.

Lisa and I went with Charlie to see the This Old House Carlisle Project this weekend. As regular readers will recall, we infiltrated the area a few months ago to find trade trucks pulled up but otherwise nothing much in the way of visible activity. This trip was a little different. For one thing, we were paying to go—which was ok as the proceeds from the tickets support a good cause. For another, there were no trades in sight (though there was still some work to be done). This tour was really about the house and what the decorators had done with it.

I’m pleased to report that even the most questionable rooms (with one exception) looked much better in person than they did on TV. The “very red” entrance hall actually looked really good, for instance, as did the kids’ bedrooms. The topiary dragonfly over the breakfast table, however, looked not just out of place but scary. We asked a number of pointed questions about the sculpture, such as whether it needed to be watered and whether the family that bought the house was planning to keep it. (Oh yeah, spoiler warning, highlight text to read: someone bought the house for about $1.8 million.)

One comment from just about everyone on the tour was how much smaller the house felt than it looked on TV. I thought that was a tribute to the architect; it could easily have felt echoey and cavernous. Some spaces, including the library, were just about perfectly proportioned and executed. But I thought the barn was disappointingly unbarnlike after the decorators got done with it. The fireplace helped add ambience as did the barn timbers, but mostly it felt like a room with tall ceilings.

Lisa and I both decided it was much more satisfying watching the actual structural work happen than touring the house as a designer showcase. And we know how I feel about interior design showcases. (I should note, however, that it was a hell of a lot of fun to check out the mechanicals in the basement. The boiler and those plumbing manifolds look even more impressive in real life.)