Fellow Wahoos Rob Blatt and Sam Riegel put together a little “Conservative Eye for the Liberal Guy.” Just a touch heavy-handed, but funny.

Larry Thurlow, who commanded a Navy Swift boat alongside Kerry in Vietnam, has strongly disputed Kerry’s claim that the Massachusetts Democrat’s boat came under fire during a mission in Viet Cong-controlled territory on March 13, 1969. Kerry won a Bronze Star for his actions that day.

But Thurlow’s military records, portions of which were released yesterday to The Washington Post under the Freedom of Information Act, contain several references to “enemy small arms and automatic weapons fire” directed at “all units” of the five-boat flotilla. Thurlow won his own Bronze Star that day, and the citation praises him for providing assistance to a damaged Swift boat “despite enemy bullets flying about him.”…

Last month, Thurlow swore in an affidavit that Kerry was “not under fire” when he fished Lt. James Rassmann out of the water. He described Kerry’s Bronze Star citation, which says that all units involved came under “small arms and automatic weapons fire,” as “totally fabricated.”

Now, someone is lying here. And my money says that the DOD, which would have every reason to cast Kerry in a bad light following his war protest activities, is probably telling the truth. Which makes Thurlow, in plain speech, a bad actor and a liar.

Then from Beaverton, Oregon, comes this lovely photo of reasoned rebuttal from a Bush supporter (courtesy Oliver Willis): 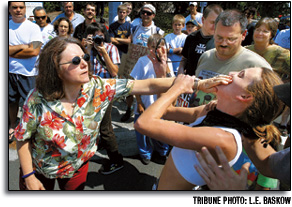 It’s good to know that the administration’s record on civil liberties is setting a positive example for its supporters.

Over at my old work blog, the Microsoft.com Community Kitchen, John Eddy has posted about his job as Newsgroup Administrator for Microsoft. In the process, he conveys a little bit of emerging philosophy about software support:

I believe in the newsgroups.  I believe that NNTP is a good solution for technical support.  I do not believe it is the only one.  I believe there are places for IM, chat/IRC, mailing lists and good old phone support, and yes, even blogs and wikis.  Heck, I really think MUDs and MUSHes could be utilized too (yes, I still mud in this day and age) and would make a great forum for online conferences, in this day and age when physical attendance at conferences seems to be down.

When I interned at Microsoft in 2001, helping to work on the first iteration of executing Microsoft’s online community strategy, we called this “finding where the party is and making sure we were there with the beer.” In other words, it’s most helpful to our users if we can engage where they already are.

On Anita’s suggestion, I got out of our house last night and down to the Trident Cafe on Newbury Street for the Boston Blog Meetup. In attendance:

Had a good time, even though the free wifi was a little low-powered. No complaints, though, especially since the provider, Michael Oh of Tech Superpowers, popped up on my Rendezvous list in iChat!