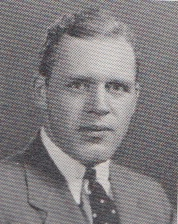 As these things tend to go, my Virginia Glee Club history project has ebbs and flows. Sometimes there’s not a lot to write about; sometimes there’s too much. Like this past week, when I nailed down the identity of a few presidents of the Glee Club and discovered one was a third cousin.

I should have known that when I found someone named Frantz Hershey, he would turn out to be a relative. It turns out that not only do I know him, I have him in my genealogy. Ezra Frantz Hershey, Jr. was the president of the Glee Club in 1938–1939; he was also the son of E.F. Hershey, first cousin of Milton Hershey and treasurer of the Hershey Chocolate Company for over 40 years. Frantz is therefore my third cousin, twice removed.

As they say, you can’t make this stuff up.

I also confirmed Dan Vincent and Thad Polk as presidents of the Club in 1984-85 and 1985-86, thanks to a newly available Cavalier Daily article that showed up in Google News since the last time I checked. Surprisingly, even with those discoveries, I know less about the 1980s presidents than almost any other decade: I’m still missing information about 1980–81, 1981–82, and 1986–87. Always more work to do…

One thought on “Cousin Frantz”