A while ago I wrote about how Apple’s offer to upgrade previously purchased music to iTunes Plus, their “drm-lite” offering that raised recording quality and eliminated copy restrictions, had gone missing.

At that point the issue appeared to be faulty infrastructure, since the link was sometimes available and since you could hit the page directly if you bookmarked it.

Today, it looks like the page may be gone for good. I haven’t seen it in the store in several weeks, and the bookmark now returns a “Could not complete the iTunes Store request” popup.

While I’m not entirely surprised—the promotion has been running for what, four years?—I’m disappointed. Because this is what I see in my smart playlist that contains the old, “FairPlay” encrypted, DRMed iTunes Store downloads: 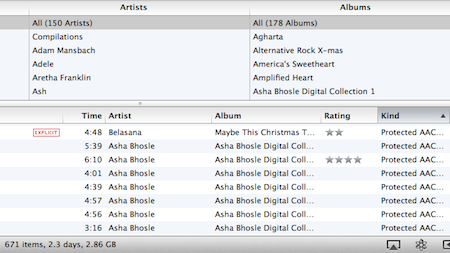 That’s right. 671 tracks, in about 178 albums, that were never made available for upgrade through the iTunes Plus page. I know, because every time something was made available in Plus, I paid the 30 cents per track or $3 per album to get my music out of DRM jail.

So my question to Apple is: what happened? Did the rest of the music never get “plussed” because of the labels? Or did you just forget?

I’ve read some speculation that iTunes Match is the new “upgrade to iTunes Plus”. If so, I’m still out of luck, because I have more than 25,000 songs in my library—all purchased legally, I might add, though some came from eMusic or Amazon, or were ripped from CDs or vinyl that I own.

So let’s see: I’m stuck with a bunch of DRMed music that I can’t unDRM, contrary to Apple’s iTunes Plus promises, and I can’t take advantage of the other legal path offered to me because I’ve been too good a music customer.

Is it any wonder that people just say “screw it” and download music for free?

2 thoughts on “Whither iTunes Plus upgrades (again)”