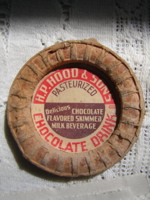 If your first introduction to Starbucks was in the last few years, you may not realize that the woman in the logo is a mermaid—or that she’s holding her tails wide open in a fertility gesture. Dead Programmer traces the evolution of the logo from 15th century fertility symbol to 21st century corporate logo and explains how it has morphed over the years.

What he leaves unexplained is what happened when the first radical leap occurred, from the brown “coffee, tea, spices” logo to the green more stylized mermaid. As I recall reading in a print article about ten years ago, this happened as part of a general brand refresh (or first brand design) that also ushered in the use of subtle “steam” graphics in the packaging, the introduction of earth-toned paints in the graphics and the stores, and just about everything you think of as the modern Starbucks iconography. This all happened about the time Starbucks made the shift from mail order coffee into retail and began to appear on the East Coast. I think the article appeared in How magazine. (I can’t find the article online, but there was a recent article about the work of the in-house Starbucks design team that does appear on the How site.) 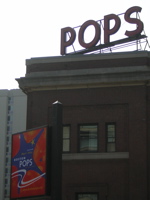 A week late, here is an assortment of photos I took near Symphony Hall last Saturday, the morning of my first Pops concert. The vantage point is at the intersection of Massachusetts and Westland.

In the captions, I joke about not knowing the Boston skyline. It’s true, though I have learned that the funny round building with the Darth Maul spikes is called 111 Huntington Avenue. It needs a better name. 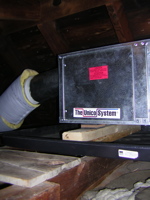 Yesterday’s first day of installation went pretty well. Our contractors spent the morning preparing the small air handler by installing an expansion valve, then managed to load it into our small attic (in spite of a very small access panel and a very tight roofline) and spent the rest of the day preparing and insulating the main ducts and marking the locations for the ducts on the second floor. I didn’t manage to get many photos, but that’s our air handler and the very tight space around it.

A word about our installation: we are going for a full conversion. As I mentioned before, we’re getting a Unico system installed. Our setup consists of two small air handlers, the aforementioned attic one for the upper level and one in the basement for the lower two floors. Our contractor is combining this system with a high efficiency gas boiler which will provide indirectly heated hot water to coils in the air handler that will provide heat in the wintertime. As a consequence, we get to eliminate the old boiler and all the radiators.