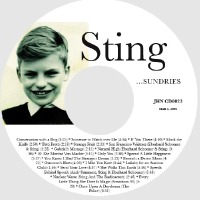 At Art of the Mix: Sting Sundries. This one goes back a ways: 18 years, to be exact.

I was just getting started in pop music and was discovering the wonder of the b-side. Since I only listened to a handful of artists and since Sting’s 1987 release “…Nothing like the Sun” was in the process of rocking my world, I was seeking out Sting singles for the b-sides. I found two: the 12″ vinyl of “We’ll Be Together” and the CD3 of “Englishman in New York.” I subsequently went crazy trying to figure out how to get the CD3 to play so I could tape it. You could buy an adapter to make it a 5” disc, but the adapter wouldn’t work in my parents’ CD player so I had to beg friends to let me see if it would play in theirs. I finally managed to tape the songs and in my infinite wisdom sold the CD3 some years later. At least I still have the vinyl.

I filled half a 60 minute tape with Sting rarities and shared it with Fury, who filled the other side with Dream of the Blue Turtles era b-sides and cuts from the Eberhard Schoener album Video Magic. I was hooked. I still have the tape.

Fast forward: many b-sides and the Internet later, I’m still missing five of the songs on the original tape in digital form but decided to release an updated version anyway with some newer rarities added in, including prototype cuts from Strontium 90, the band in which Sting met Andy Summers and Stewart Copeland, and a 1978 single from Sting with a backing band called the Radioactors. For those missing five songs, including the ten-minute version of “Up From the Skies” recorded in the studio with Gil Evans’ band, I’ll have to keep looking.