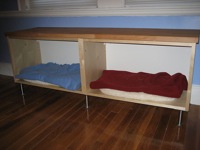 As detailed on these pages back in October, I started our first real IKEA Hack project at the tail end of the kitchen renovation. We wanted a bench for the dining room and a place for our Bichons to sit while we ate. In October, I did the first part of the project—building the carcass of the bench from two 27 inch Värde wall cabinets, fastened side by side, and six Capita legs. And there the project sat while we finished the kitchen and took care of some other work around Christmas. I did manage to trim down a section of a Pronomen countertop, which had been in temporary use in our kitchen before we started the project

This weekend I finally got around to finishing the project, which entailed fastening the countertop to the bench base with 1 3/4 inch #10 Phillips screws. If I had to do it over again, I would have laid some felt down between the countertop and the bench carcass, because I notice an occasional squeak from the bench. But overall it’s a pretty functional unit, and it’s rock solid. And the dogs love it—we put in 24″ dog beds and now if we’re in the dining room, they’re in the bench. If they’re not begging, that is.

Photos from both stages of the project, now including the finished bench top, are on Flickr.

Since Nick Drake is basically the patron saint of obscure, beautiful, depressive singer-songwriters—the proto-Elliott Smith, if you will—hearing that a new album of Nick Drake rarities, none of which have ever been heard before, is a little like hearing that the Police are going to reunite: one is both excited and a little afraid to hear what is coming. The late Mr. Drake will be playing SXSW—or so it would seem, with a documentary, panel discussion, and set of tribute acts scheduled to show up.

All of the above is not bad for a guy who was legendary unknown even to his record company: in the press release for Drake’s final album Pink Moon, the Island Records guys said:

The second time [we saw Nick Drake recently] was a week or so ago, when he came in, smiling that weird little smile, half-mocking, half-bewildered, and handed over this, his new album. He’d just gone into the studios and recorded it without telling a soul except the engineer. And we haven’t seen him since.

The point of this, is this: Nobody at Island is really sure where Nick lives these days. We’re pretty sure he left his flat in Hampstead quite a while ago…

But all of this bull is just the hype machine turning for an artist 35 years dead, right? Well, except for the music. And if you listen to the unreleased track on Stereogum, “To the Garden,”, do you begin to understand why people are willing to mount (parts of) festivals in this guy’s honor so many years later? Er, with some difficulty. The sound quality is poor, the speed of the tape seems too slow (or else Drake’s voice changed radically during his career)… And yet, it’s quintessential Nick Drake, that mix of melancholy and lyrical melody that is at the core of his latest recordings. Makes me wish he had recorded a clean take, and makes me very curious to hear what else he has up his mouldering sleeves.

Obligatory Nick Drake cross-reference #1: The title of this post is from a Clem Snide song, “Nick Drake Tape”: That Nick Drake tape you love/Tonight it sounds so good/As brown as leaves can get/And sleep is what you should.

Obligatory Nick Drake cross-reference #2: Christopher O’Riley, previously having released two albums of classical piano Radiohead covers and one of Elliott Smith tunes, has been doing Nick Drake songs in concert. I look forward to reviewing that disc when it comes out….