I was featured in a UK article about the conference that I spoke at in Bristol a few weeks ago.

I’ve written a series of blog posts on the Veracode blog about application security. Check them out, if that sort of thing floats your boat, or if you just want to see what’s up in my professional life.

Note that I don’t generally write my own headlines, so I don’t claim responsibility for clickbaityness or comma splices. 🙂

Wired: Meet John Knoll, the Special Effects Genius Behind Rogue One. Turns out that Knoll wasn’t just responsible for the special effects; he actually made the story pitch to Lucasfilm. Looking forward to seeing this movie.

Still got the turkey tryptophan blues? Meet your new time suck: Lode Runner in the browser, available in Apple II or Commodore 64 flavors.

PS: you can buy a collection of Phillips’ work, including the “Denomination Blues,” from Dust to Digital.

Two streams of media combined for me in the last few days. I finished reading The Underground Railroad last week, and I found The Year of Jubilo on Dust to Digital. Both brought an immediacy to some of what I’ve been thinking and learning about my country and the South in the years before (and during) the Civil War.

The Underground Railroad dramatizes the already-dramatic-enough role that some Southerners played in helping escaped slaves to safer (but not safe) destinations in the North, by mythologizing it. Sort of.

Colson Whitehead preserves a lot of things that really happened in the Underground Railroad, such as concealing runaways in attics and under haybales in wagons, but mythologizes the motivating spirit by envisioning a vast, mysterious underground network of tunnels with real trains running beneath barns and sheds. When Cora the runaway slave asks in astonishment “Who built it?,” the reply comes “Who builds anything in this country?” “Who do you think made it? Who makes everything?”

The unspoken secret: We built it. We built everything in this country. As Whitehead’s messianic Lander says later in the book, “Black hands built the White House.” The secret Whitehead tells is that the Underground Railroad wasn’t made up of well meaning whites with their attics and trap doors; it was built by the slaves themselves who decided they would fight for their freedom.

The flip side of that self determination? “The Year of Jubilo.” This is a Civil War song, written in 1862 by Henry Clay Work as “Kingdom Coming,” and familiar to fans of Tex Avery by its inclusion as the tune whistled by the “Confederate wolf” in “The Three Little Pups.”

Knowing it’s a Civil War era tune doesn’t exactly prepare modern ears for the lyrics. Even without the dialect, lines like “Say, darkies, have you seen the massa with the moustache on his face” are jarring to modern ears. But listening closer, the inversion that the song depicts, with the master running away from the arrival of the “Lincoln gunboats” and pretending to be a runaway slave himself to await capture, while the slaves avail themselves of his wine, is a different facet of the Civil War experience and captures part of the feeling that the world was turning upside down.

Bloomberg: Apple abandons development of wireless routers. End of an era. I just bought a new AirPort router a few months ago and love it, but the handwriting was certainly on the wall with this product that hadn’t been refreshed in three years.

As much as I’ll miss the AirPort brand, this move is consistent with Apple’s product strategy. Contrary to popular opinion, they don’t always insist on making every bit of gear in the ecosystem—only the ones where the existing options aren’t satisfactory. They haven’t made a printer in almost twenty years and got out of external displays earlier this year; dropping out of the wireless business is a logical next step.

One of my good friends from the TFC is slightly less famous than her dog. That’s no knock on Dana, but when your dog is Instagram celebrity and gorgeous Samoyed Harvard Dangerfield, you get used to playing second fiddle to his gorgeous floof.

Harvard’s having some health troubles, so Dana has put up a page selling a calendar and some other Harvard merch as a fundraiser. Do your Christmas shopping a favor and pop over and buy a calendar!

Early in a trip, when I’m traveling away from home, the sleep madness awakens me early and I’m madly productive and I think grand thoughts.

The best thing that happened today, after delivering my talk, was this lunch: From left to right, that’s olives and fava beans, a lovely Tempranillo, bread, fried fish, and fried eggplant sticks. Not pictured: anchovy concoction that I gobbled down.

After that, I got to talk UX with the understatedly funny Victoria from Seoul, and then:

I’ve decided that my chief error was in not sleeping well last night. At the moment I feel ready to sleep for a week, but I have to be up in three hours to shower before the next taxi and the next flight.

Looking forward to being home. 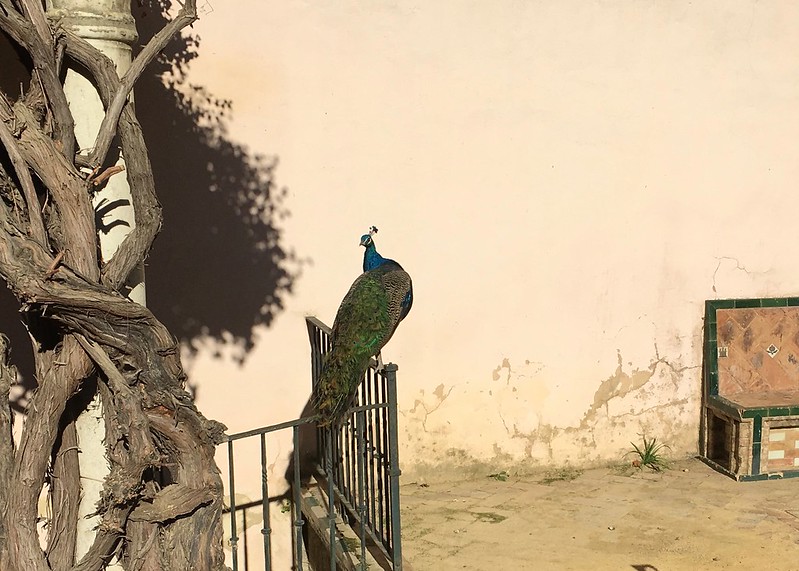 As promised, I wanted to share the rest of my Seville photos. This set includes photos from the Alcázar, the Cathedral, and the Giralda, including the tomb of Christopher Columbus and an awesome ecclesiastical bookshelf.

A few other favorites below, but click through to the full album. 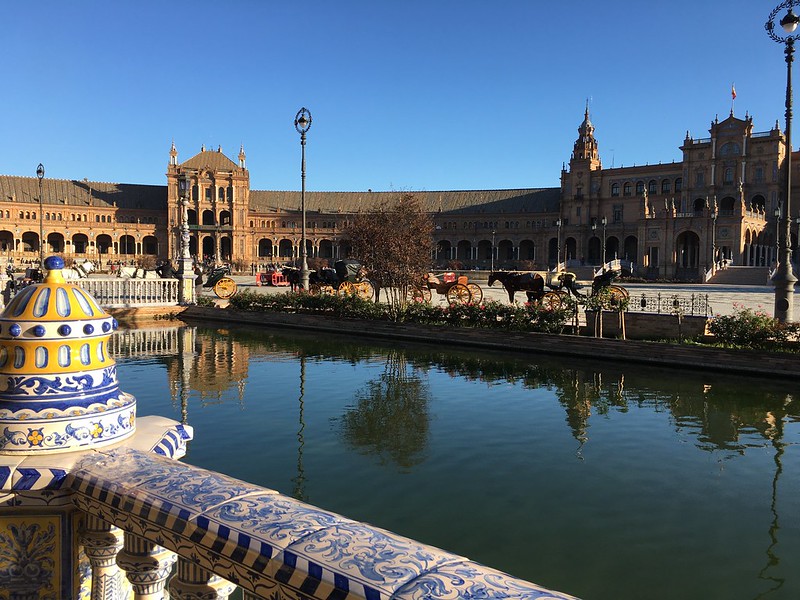 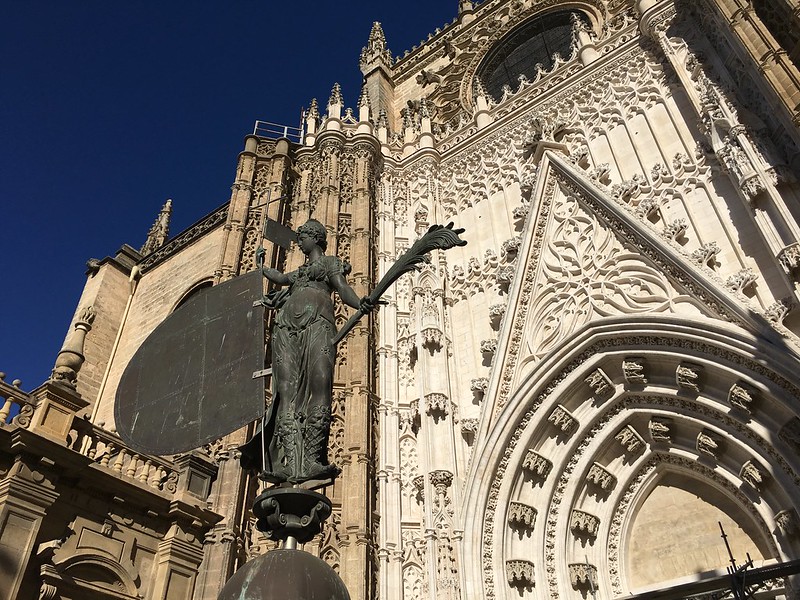 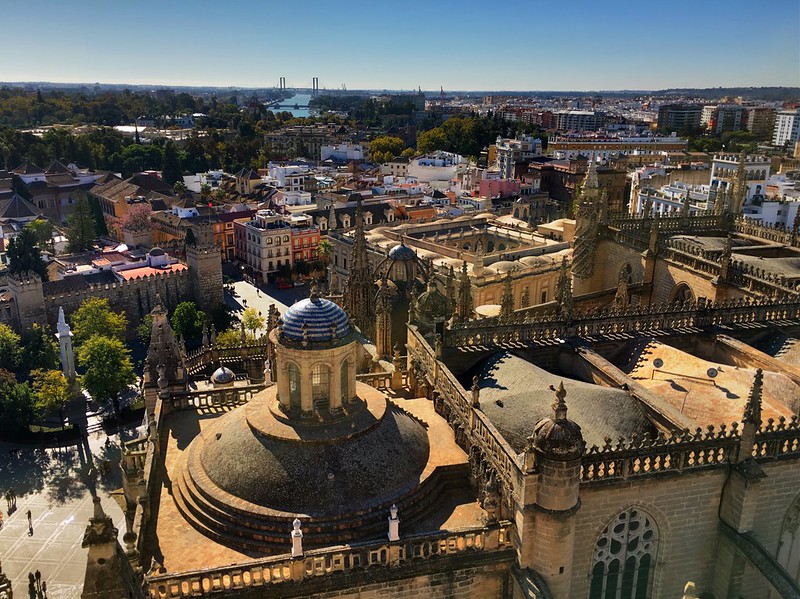 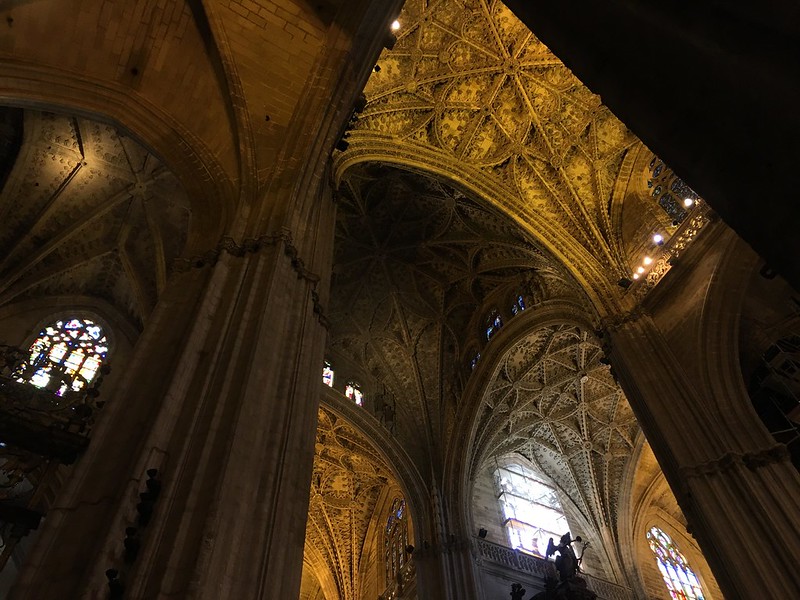 I had a rare opportunity this morning to play tourist in the center of the old city of Seville, and I took it, visiting the Cathedral, its attached bell tower (and former minaret) the Giralda, and the Reales Alcázares de Sevilla. Like the Giralda, the Alcázar has roots in the Moorish Muslim past of Seville, and it’s unlike any place I’ve visited before, with rooms visible from other rooms in a twisting, labyrinthine layout.

I took a lot of photos and will post more soon.

Cavalier Daily: Professors ask Sullivan to stop quoting Jefferson: Faculty, students believe Jefferson shouldn’t be included in emails. This letter has blown up, so a few words about what happened:

If you’ve been reading my blog this year, you probably already know how I feel about this. I tried to express it in this post about appreciating Edgar Allan Poe’s art while rejecting his racism, but I don’t think I was clear enough.

This country may have been founded out of a desire for religious liberty and economic opportunity, or just for economic opportunity. But, as far back as 1640, our colonial forebears gave a legal basis to slavery, and by 1750 even colonies that rejected slavery on moral grounds (like Georgia) embraced it because of a shortage of workers. And ever since that tradeoff of morality for economic benefit was made, slavery and its corrosive effects have been at the heart of the history of this nation.

You want to knock Jefferson for being a slave owner? Here’s one worse: the economic growth, largely agricultural, that enabled this nation to come into being in the first place, that allowed it to grow strong enough to fight for and win its independence, was driven largely by the labor of chattel slaves.

You cannot uphold the ideals of American democracy and inclusiveness on the one hand while denigrating the intellectual contributions of a Thomas Jefferson on the other. Indeed, you have to acknowledge that both Jefferson and America were, and are, imperfect, are in fact stained with the same original sin.

But that cannot be a reason to stop being inspired by the ideas that Jefferson created and the hope that he gave the world. Jefferson’s great genius was that his intellect led him to ideas that had far greater implications for humanity than even he originally intended; that carried far greater moral authority than he could ever claim. The rejection by the young United States of the inherent inequity of the class systems of Britain, of the monarchical inequities of Europe, and the embrace of the idea that a people have inherent rights and should determine its own destiny, are all ideas that were far bigger than their limited implementations in 1776, or 1787, or 1863, or 1920, or 2015.

I recognize that I write this from a place of privilege, that I cannot in fact have any idea what Jefferson’s hypocrisy, his endless contradictions, and his inhumanity to his fellow man feels like to an African-American, or to anyone else. But to me, to demand that we silence Jefferson seems like the wrong response, now more than ever. We are all of us imperfect strivers toward an ideal we cannot possibly uphold. We should seek to hold a clear eye on the failings of those that came before us, while still acknowledging that their vision and ideas put us on this path in the first place.

A gray and lukewarm day today, at least by Massachusetts standards. I relearn the importance of taking trains where possible, after an hour long cab ride at London rates out to Gatwick.

The bar in the terminal has lunch and American microbrews. I fly British Airways; the language is a shock when I land.

But the cab from Seville Airport is fixed rate to the city center and the cab driver plays “All Blues.” And the hotel restaurant makes a mean Negroni, which comes with a dish of complementary olives.

I think I’ll survive this trip. Though it is, once again, making me regret my decision to only study dead languages in high school and college.

Here’s what I had queued up in my Fresh Cuts playlist for this trip:

You’d almost think I was planning ahead. Another Monday, another international flight. Itineraries are getting harder to construct the more I do this. This time I have an overnight stay in London en route to Seville.

I’ve never been to Spain. I hope it lives up to the billing. I don’t think I’ll have the same reaction Sylvia Plath apparently did. For one thing, I won’t be going to any  bullfights, though an open source conference might amount to the same thing.