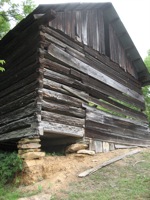 I uploaded a bunch of photos last night to Flickr, including some from our vacation in North Carolina: some purely family photos and one large set of a visit to the place I will always remember as Grandmother Jarrett’s house.

As you can see in the photos, it’s not really a house so much as a farm, with as many as seven or eight buildings on the property (counting various barns and one chicken shack). The property was built up over the years starting with my great-grandfather, Zeb Jarrett, who built the house. In one photo you can actually see the evolution of the house: the section with the porch on the right was the original house built by Zeb and Laura, while the middle section was added on a few years later and the part on the left was added by my grandfather. The house was well kept up over the years, and my aunt has put it in exceptionally good shape after my grandmother passed away a few years ago. But without my grandmother there, it feels like a stage set waiting for someone to walk on.

In fact, walking past the barns I felt the truth of Laurie Anderson’s lyric: When my father died we put him in the ground. When my father died, it was like an entire library burned down. In this case, everything still stands but the spirit of the place is gone.