CNet: Salesforce.com throws its hat into political ring. Salesforce.com, already a player in the online CRM market, is marketing a custom edition of its application to manage political campaigns.

Web software as a service in the political market? Sounds a lot like the business plan of Blue State Digital, right? Except of course that it’s an entirely different play. Salesforce’s application focuses on tracking donors, managing campaign budgets, and reporting to the FEC. Blue State Digital does campaign strategy and grass roots enablement—and taking online donations.

The difference appears to be that Salesforce is taking a top down approach, assuming that the campaign is in control and driving the get-out-the-vote events and other campaign activities. Blue State Digital’s approach assumes that its job is to get the voters riled up, harness their energy and ideas, and enable them to identify viable candidates for office and organize their own campaign activities around the candidates of their choice. Big difference.

In fact, kind of the difference between traditional marketing and Cluetrain marketing.

Oh, and the other big difference? Salesforce’s product, Campaignforce, is in use by Mitt Romney, the Republican candidate who has made his own governorship of Massachusetts into a punchline and retreated from every position he took to win the state. The products by Blue State Digital are in use by the DNC, Democracy for America, and Harry Reid—you know, the folks that led the way to the Democrats regaining power in both houses of Congress last November.

I do have to give credit where due, though: SalesForce’s integration with Google Maps and YouTube sounds cool. 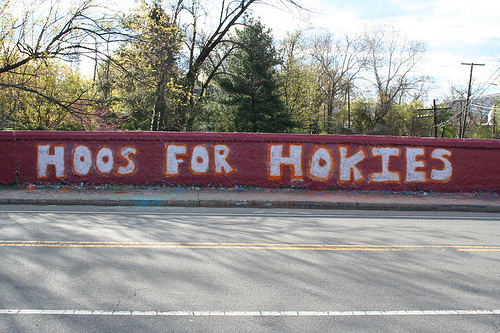 I think that, today, we are all Hokies.