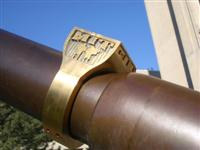 Ever feel nostalgic for the good old days of MIT hacks, where devoted, slightly nutty students pulled off feats of engineering brilliance while evading the watchful eye of campus security? Well, mourn no more, Bunky, cause the MIT hackers are back with a vengeance. I think moving a Spanish-American War era cannon across the country through an inspired bit of social engineering qualifies as pretty impressive on its own, but adding the machined aluminum, gold plated Brass Rat (Brass Rat defined) to the cannon was absolutely inspired. Nice plaque too.

And knowing that the cannon was previously stolen by CalTech neighbor Harvey Mudd, and that this theft occured on the 20th anniversary, and that the social engineering included a phony moving company called Howe & Ser (Howe Et Ser) Moving Company? Priceless.

What a great show. I’ve been on a Neko contact high all morning. It’s such a different experience to go to a small venue to see an artist who is genuine and unpretentious—plus has one of the biggest voices around.

Neko’s setlist was heavy on recent songs up front, with quite a few from her new album Fox Confessor Brings the Flood, and was rounded out by a few tracks from Blacklisted (including a superb “Deep Red Bells” and a haunting “I’ll Be Around”) and a handful of well chosen covers, including her version of “Wayfaring Stranger” (which appears on her live recording The Tigers Have Spoken) and a Buffy Ste. Marie cover whose title I didn’t quite catch. In between songs she and the band traded quips about life on the road (Neko: “I caught a whiff of myself just there and missed a chord. I don’t think I’ve ever smelled as bad in my whole life! I smell like … a salmon!”) and generally yucked it up onstage.

Points of improvement? Well, her band was competent and genuinely sparked in a few places, such as the encore numbers, but they’re no Calexico (with whose members Neko has cut the last few albums). An exception was the divine Kelly Hogan, a formidable singer in her own right, who backed up Neko on vocals. Another issue with the earlier part of the set was the nature of the songs on the new album. On record they feel like a driving collection of compressed vignettes that hang together wonderfully. On stage the songs felt short and detached from each other. The band was tight, maybe too tight—a little more room to play around with the structure of the songs and grow them a little would probably be a good thing.

But these are minor quibbles in what was ultimately a great evening. The opening act, Martha Wainright, was good too—quite funny, very salty, and another wonderful voice. Vocally she reminded me a little of Hope Sandoval, only with a broader range of high notes and with better pitch.

And that Neko contact high? I got to meet her after the show. As she signed my copy of her available-only-at-gigs Canadian Amp EP, I told her how much “Deep Red Bells” and Blacklisted in general had meant to me, and walked away happy as … a salmon, I suppose. She’s smaller in person than she looks on stage, but friendly and genuine even after playing a two hour set… and teching her own guitars on stage prior to the start of the show.